Lloyd's Saturn as it looked in 1952 when it was shown at the Petersen Motorama in Los Angeles.[1] 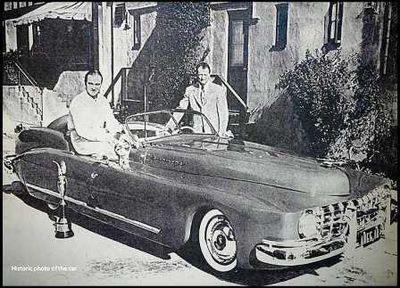 Bob Hope with the Saturn.

An ad about the "Car of Tomorrow" and its appearance in Algona, Iowa from Algona Upper Des Moines Thursday, July 23, 1953

A photo of the Saturn from The Aurelia Sentinel Thursday, August 13, 1953. 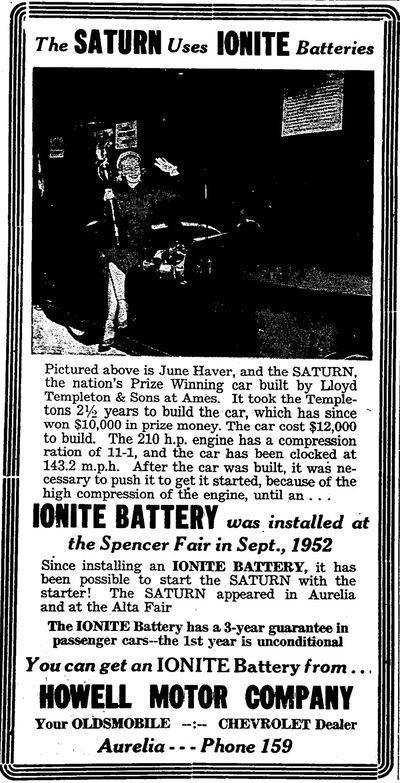 The Saturn appearing in an ad for Ionite Batteries. The ad was run in The Aurelia Sentinell, Thursday, August 13, 1953. 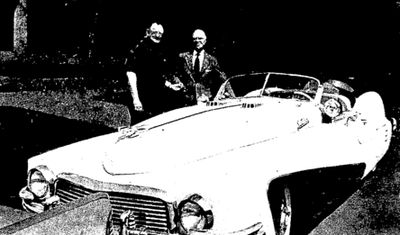 The Saturn as it appeared in 1972 when Lloyd Templeton bought it back from Elmer Hoversten. Photo by Joyce Manchester.

The Saturn as it appeared when it was offered for sale in 2009. 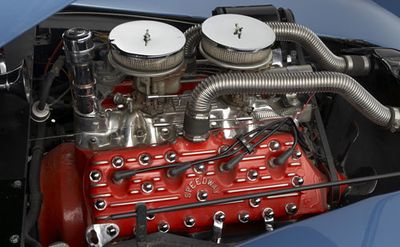 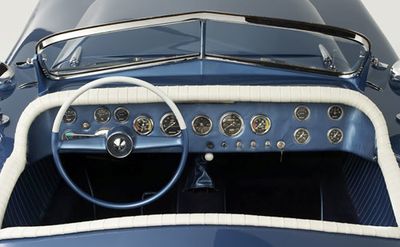 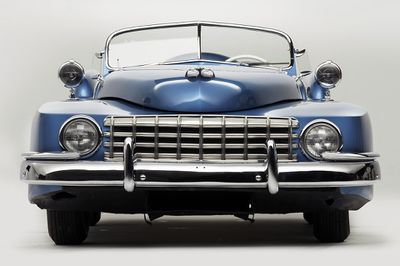 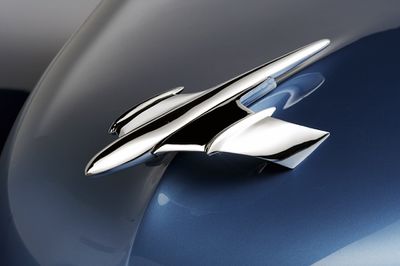 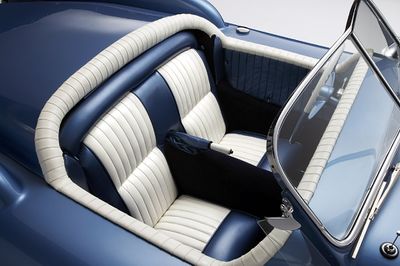 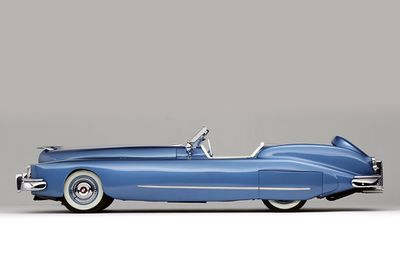 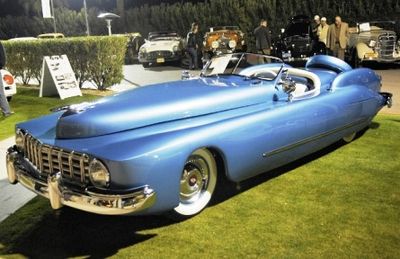 The Saturn is a one-off sport custom built by Lloyd Templeton and his sons Don Templeton and Bob Templeton of Ames, Iowa. The build started in the summer of 1950 as Lloyd and his two sons visited Hannibal, Missouri. In Hannibal they ran across a chassis that a California custom car manufacturer had started to build. Lloyd bought the chassis and body as it was and took it back home to Ames. Lloyd and his sons dismantled the car before they spent two and a half years rebuilding it in to the Saturn. The chassis was from a 1946 Mercury, and the motor was built up from a standard Mercury block. The motor had a 288 cubic inch displacement, developing 210 horse powers at around 5000 RPM. Lloyd designed the engine to use either gasoline or alcohol with minor jet adjustments.[2] $1200 USD was used on the engine.[3]

The body of the Saturn was made by hand, almost entirely of 16 gauge sheet steel drawn over a tubular steel frame. Rear fender fins were made out of four 1949 Chevrolet fenders split in half and welded to the rear deck. The rear deck was made from a Hudson hood reversed and modified to blend in the general design. The hood measured seven and one half feet in overall length. The front portion of the hood was made from panels of a Dodge, and the rest were sheet steel. The bumpers were from a 1946 Pontiac, and the windshield was supposedly a reworked early Ford V8 roadster windshield. The headlights were from a 1946 Studebaker, and the nose sported a 1946 Dodge grille.[4] The cockpit was designed from an airplane and the instrument panel consisted of 16 different gauges.[2]The car was four feet high from the top of the windshield to the ground, and 18 feet long from bumper to bumper. In 1953 the car had been clocked at 143.2 mph.[5] The build was completed June 10, 1952, and was taken to Minneapolis for an entry in the national Speedorama, where it won the show in the custom class.[2]

November 10 thru 16, 1952 The Saturn was shown at the third annual Motorama[6] in Hollywood where it won the most original custom car class. The car was also chosen out of 120 participants as a special advertising car by Paramount Pictures and was on call by the studios at the rate of $500 per day when used in a full length motion picture. By then the car had also won prizes at the Motor World Fair, Herb Shriner's International Show, the third National Speedorama. In addition to this the car had been exhibited at various shows, fairs and races such as the Dairy Cattle Congress, Iowa State Fair, Tri-county Fair, West Palm Beach County Fair, and the Florida State Fair at Tampa.[2] On a special appearance, Templeton claimed that he had a three-minute segment promoting the car at a local TV station in Iowa. Templeton finished the promotion by announcing that the car would be on display near the broadcast studio, and that people could view it up close for just 25 cents. Templeton also claimed that 17,000 people lined up and paid their quartes to see the one of a kind car.[4]

July 1953 the Saturn was shown at a stock car race at Milford. During the race Leo Christenson of West Bend, who drove Carl Gresham's stock car "Eight Ball", lost control of his car, jumped seven feet in the air and over an open ditch before it landed beside the Saturn. He bumped into the car and scarred the green paint and broke a fender. After the accident the Saturn was taken to Lake Park for a complete inspection. According to a story in Kossuth County Advance the car had just returned from Hollywood where Bob Hope had offered Lloyd $13,000 for the car.[7] Reportedly there was discussion about using the car in one of Hope’s Hollywood movies. Unfortunately the movie didn’t pan out, however Hope fell in love with the car and was often seen driving the Saturn around Hollywood over the next year. Hope’s close association with the car led to the moniker, The Bob Hope Special.

As the Saturn continued to gain fame, it eventually found its way into the pages of the March 1954 edition of Ford Times featured in their Custom Conversions column, reportedly brought to the attention of the company by none other than Ed Sullivan, whose television show was sponsored by the Lincoln-Mercury Division of Ford Motor Company.[4]

According to Ames Daily Tribune Thursday, May 18, 1972 Elmer Hoversten bought the Saturn in 1956. In 1972 Elmer sold the car back to its original owner Lloyd Templeton. By then the car had been painted red and white, and the design had changed since it was originally completed in 1952. The story claims that Templeton originally built the car for John Ames, and that it had won 26 trophies including a second place in the New York Automobile Show and a first in the Miami Automobile Show.[9]

Lloyd Templeton kept his Sport Custom until he died. When he passed away he willed his beloved Saturn to his local church hoping they could make use of it. After sitting outside for more than a year, the car was sold back to one of Templeton's sons. The son later sold the car. Templeton had performed some changes to the car over the years. The new owner started a full professional restoration under Fran Roxas supervision. Fran and the owner really wanted to bring the car back to its original award winning appearance from when it first hit the show circuits in the early 1950s.

Click here to se a video clip about the 1950 Saturn

Please get in touch with us at mail@kustomrama.com if you have additional information or photos to share about 1950 Saturn.