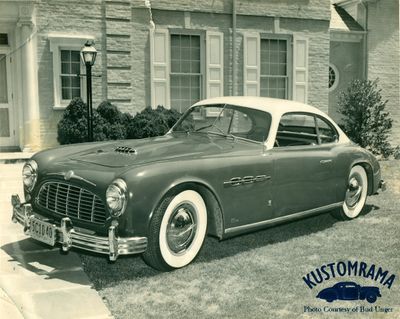 A photo of the Italmeccanica prototype that Bud Unger restyled for Roaring Richard. Bud installed a pair of 1949 Plymouth bumpers, that fitted the car perfectly. He did also paint the car. The top color was Tuscon Tan and the bottom was Chariot Red. After spraying all the coats of paint on the car, he sanded the paint down with 600 grit sand paper, the finest he had at that time, and hand rubbed it with fine compound. Bud belives the car won first place in the New York car show due to the paint job. The rare Italian sports car was also fit with flipper hubcaps. Photo from The Bud Unger Photo Collection. 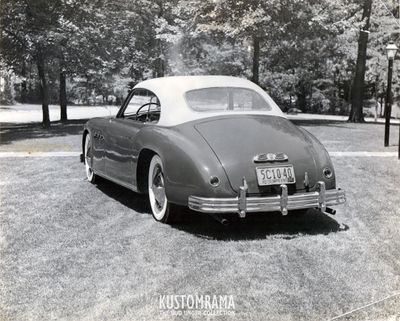 A rear end shot of the Italmeccanica prototype. Photo from The Bud Unger Photo Collection. 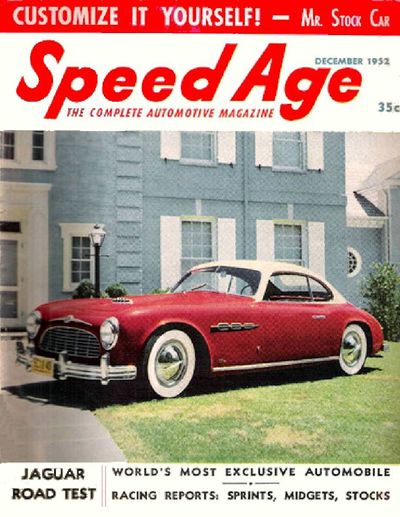 The restyled version of the Italmeccanica was featured on the cover of the December 1952 issue of Speed Age magazine. It was described as the “World’s Most Exclusive Automobile,” and the magazine included a four page story on the car. 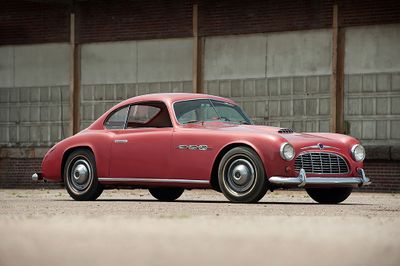 In August of 2010 the Ford powered IT160 was sold for $143,000 at the Sports & Classics of Monterye auction. It came from the collection of Clyde Ensor, Sr.. Photo courtesy of Supercars.net.

The Italmeccanica was an Italian-American automobile made in 1950. It featured a simple chassis, torsioan bar suspension, a Ford V8 engine and an aluminum body. The body was built by the coachbuilding firm Stabilimenti Farina body. America was the target market for the automobile.[1] Only two Italmeccanica automobiles are known to be produced. While the prototype was powered by a modified Cadillac engine, the second car built came with a Ford Flathead V8. Performance with the Cadillac engine was estimated to have a top speed of 140 mph and a 0-60 mph time of 10 seconds.[2]

In the early 1950s the prototype was restyled by Bud Unger. At the time, the car was owned by a fellow called "Roaring Richard." Bud fit the car with 1949 Plymouth bumpers and flipper hubcaps, before he gave it a two-tone Tuscon Tan and Chariot Red paint job. Richard's Italmeccanica was later featured on the cover of the December 1952 issue of Speed Age magazine. It was described as the “World’s Most Exclusive Automobile,” and the magazine included a four page story on the car. The author, Richard Adams, also one of the investors in the concept, notes, “We sought to manufacture a sports car combining the chassis, suspension, and luxurious body of European cars with the ease of maintenance and simplicity of the best American models. The IT160 is designed to take its place among the best American and foreign automobiles for speed and performance, but it may also be driven into an American garage and left with the simple instructions, ‘Fix it!'”[2]

Please get in touch with us at mail@kustomrama.com if you have additional information or photos to share about 1950 Italmeccanica IT160.