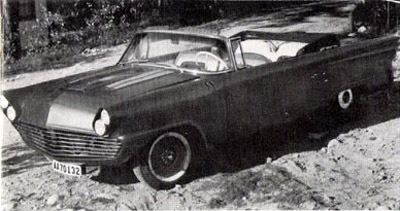 The car as it appeared in the souvenir program for the 1965 Hot Rod Show.

1955 Ford Sunliner originally owned by Örjan Lindberg and Staffan Lindberg from Sweden. The car was restyled by Örjan, Staffan and Leif Wendel. Up front the car was fit with quad headlights from a 1959 Rambler. The car was nosed, and the hood was pancaked and louvered. The front bumper was removed, and new bumperless front end was created. A tube grille was fit inside the new grille opening. The car was shaved for moldings and handles, and 1959 Cadillac taillights were installed in the rear. The interior was swapped for a 1960 Chevrolet interior featuring a black vinyl upholstery by Allan Brun. The car was powered by a 292 cu. inch Thunderbird engine.[1]

In 1965 the car was shown at the first Hot Rod Show in Stockholm.

Please get in touch with us at mail@kustomrama.com if you have additional information or photos to share about Örjan Lindberg og Staffan Lindberg's 1955 Ford.