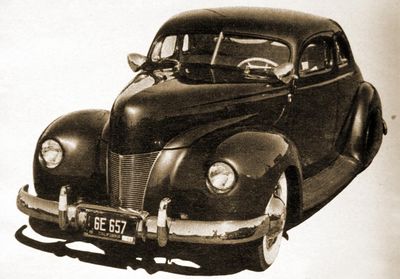 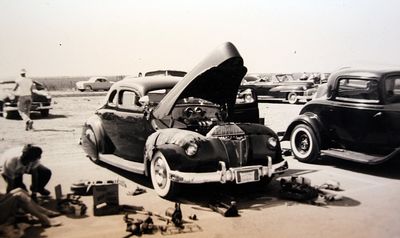 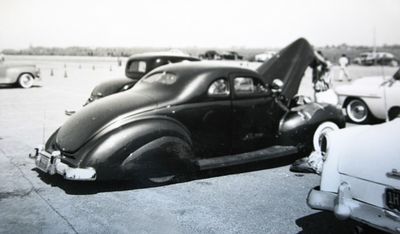 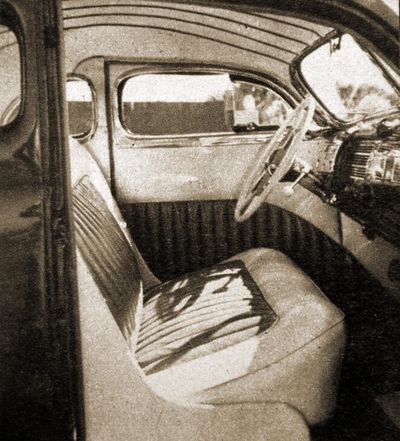 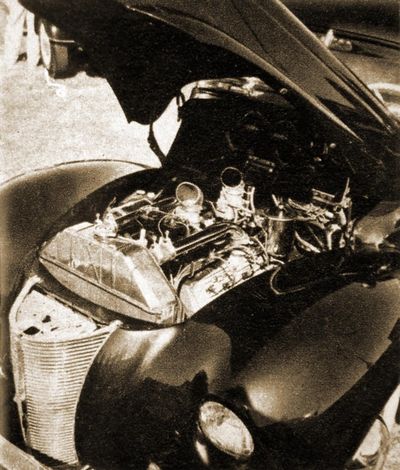 The hopped up 1948 Mercury engine 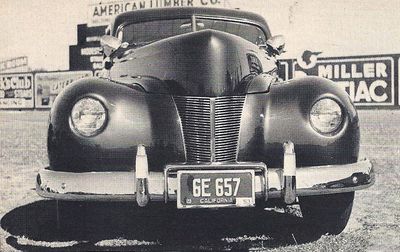 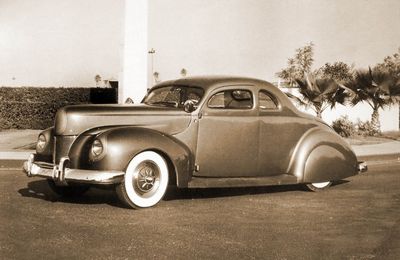 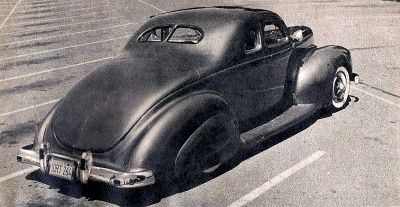 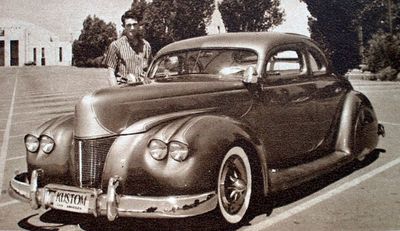 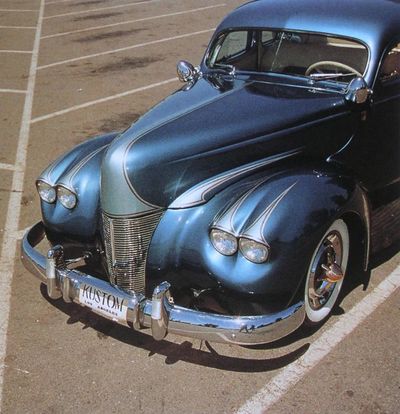 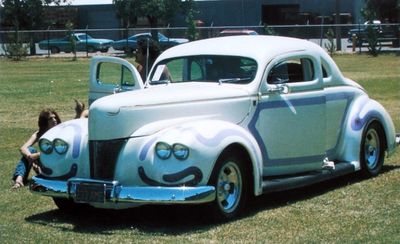 The car as it appeared in American Graffiti 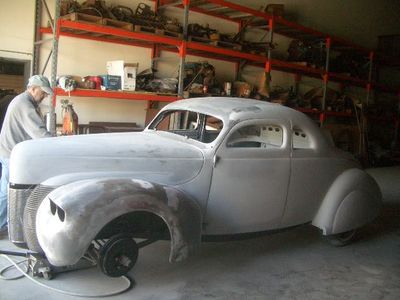 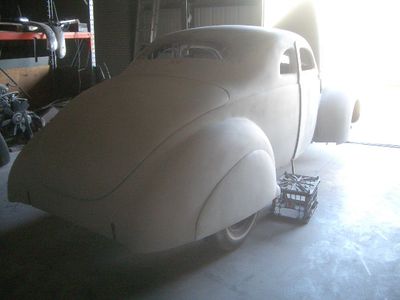 1940 Ford Coupe restyled by Kustoms of Los Angeles member Tom Hocker and Barris Kustoms. Tom Hocker of Oakland, California bought a used 1940 Ford around 1947/1948. Tom decided it had kept its stock appearance too long. With help from his brother, the car was gutted from one end to another, leaving it as an empty body shell. The aft portion of the frame from the forward part of the kick-up rearward portion.[1] The rear part including the cross member, was then repositioned 5 inches higher. The lowering job was not enough for Tom, he decided to have the body modified by Barris Kustoms. Sam and George used Tom's ideas as a starting point and added a few of their own. Barris chopped the top 2 & 3/4" in front and 2.5" in the rear. The windshield was leaned back and the rear window was leaned forward.[1] The rear upper corners of the doors were rounded and the drip moldings removed. All exterior trim and handles were removed and the fenders and rear gravel pan were molded to the body. The doors and deck lid were electrically operated by push buttons which were installed in the dash board.[1] Up front, the hood was peaked and the side grilles were replaced by solid panels which were molded to the body, leaving a much narrower and much less complicated grille. Barris fabricated new headlight rims from sheet stock which were frenched into the fenders. The parking lights were inserted in the bumper guards resting on a narrowed 1949 Pontiac bumper.[1] In the rear, the taillights were removed and new ones were installed in the bumper guards. The rear bumper was a 1949 Pontiac unit. The tail pipes were extended through the rear bumper. The car was fit with dual Appleton spotlights, a V-butted windshield and Packard fender skirts.[2]

Once the metal work was done, it was sent to Carson Top Shop for a complete upholstery treatment. The entire interior was finished in rolled and pleated white and gray leatherette with a floor carpet in neutral shade. The window frames were all chrome plated.[1]

The car returned to Barris Kustoms once again. The front was lowered 4 inches to match Tom's lowering job. Barris went over the car carefully before painting; it was painted fuchsia orchid.[1]

When the car returned back to its owner, Tom installed a 1948 Mercury featuring a 3.5/16 inch bore. Edelbrock Manifold and headers were added. The car got a Kong ignition and Zephyr gears and the rear end was modified with 3.54 gears. The souped up Merc engine made this 1940 Ford a real runner![1]

May 29 - June 2, 1957 Tom's Coupe was shown at the first annual Napa Valley Rod and Custom Show. By then a 1956 Cadillac engine had been installed in the car. The car had also been restyled further and quad headlights had been grafted on. Pontiac bumpers had been installed, and it had been painted Sky Mist Blue Metallic with scallops by Kid Jeffries. The interior was done in white and grey rolls and pleats.[3]

Tom later painted it light metallic blue with scallops. The handmade headlight rims were later replaced by double molded headlights. Sometime in the late 1960's or early 1970's, it was repainted white and purple. The car was used in American Graffiti. The car is still around, and is currently owned by Ed Hagerty. The car is now undergoing an complete restoration.[2]

Please get in touch with us at mail@kustomrama.com if you have additional information or photos to share about Tom Hocker's 1940 Ford.