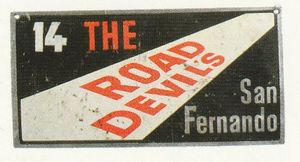 The inspiration for this club came from a movie from 1958 - "Hot Rod Rumble", in Swedish "Vägens Djävlar".


It was displayed during a short period in cinemas in Stockholm and with a young Bo "Gamen" Sandberg in the audience.


After the movie, Bo said to his friend "Pilen": - Let's start the club Road Devils! And so they did.


The attitude was clear, nothing could beat "The Road Devils". They owned the town, had the best cars and the prettiest girls.


Bo had several aluminum club plates made to hang on the rear bumper. They were numbered and given to selected members. Bo himself had the number 0, indicating he was the leader.


The plate is designed with a road, and the name San Fernando is written. That was the name of the Dragstrip where they raced in the movie.

Please get in touch with us at mail@kustomrama.com if you have additional information or photos to share about The Road Devils.