From Kustomrama
(Redirected from The Mysterian)
Jump to: navigation, search 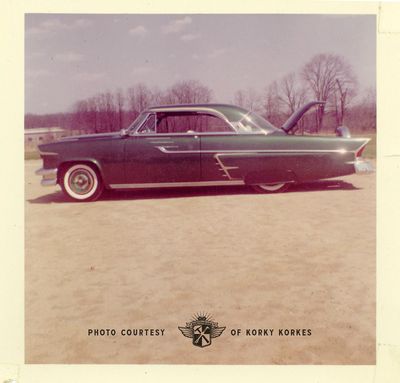 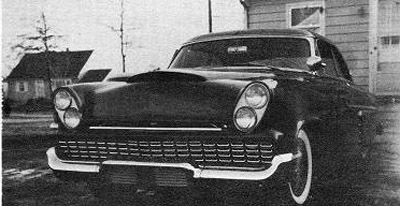 The Mysterian as it appeared in the souvenir pictorial for the 1960 Hartford Autorama. According to Thomas Casserly, an old neighbor of Korky, it looks like the photo was taken behind Korky's parents house with Hyland Avenue in the background.

1954 Mercury hard top restyled by Richard "Korky" Korkes and his cousin Bob Korkes at Korky's Kustom Shop for John Nadzon of Parsippany, New Jersey. Korky restyled the Mercury twice for John. The first version was done around 1957, featuring 1955 Cadillac headlights, a hood scoop, and rear fenders made from sheet metal and lead. The hand made rear fenders were extended 2 feet, and fit with 1956 Packard taillights. A continental kit was bought and installed between the fenders. The rear bumper was customized by hiding the bolts and by routing the exhaust trough it. 1955 Pontiac side trim was installed, before Korky painted the car metallic green with gold scallops. Dominik Sangilo upholstered it. Rodding and Re-styling magazine ran a featured story on the first version of the car.[1]

The second version of the car featured a 1958 Chevrolet front bumper, a 1959 Mercury grille and 1958 Lincoln quad headlights. The hood had 3 scoops. And the interior was now done in gold and white pleats. The trunk and under hood matched the gold, white and green interior. Korky had lowered the car by C'ing the frame. Once completed, this version of John's Mercury made its debut at the 1960 Hartford Autorama, where it was displayed along with three other Korky custom creations. John's Mercury was named "The Mysterian".[2] Korky remembers that people were not allowed inside the car with shoes. Korky last saw it in 1962. In an interview Korky did with Kustomrama in 2013 he said it was one of the cleanest cars he ever built.[1]

Please get in touch with us at mail@kustomrama.com if you have additional information or photos to share about John Nadzon's 1954 Mercury.