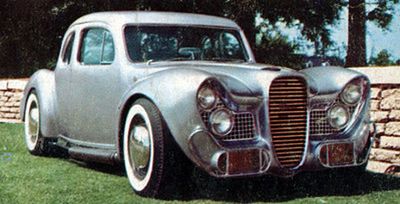 The first version of the Mark I Mist as it appeared in 1960. 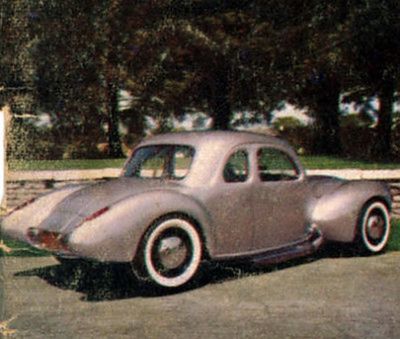 1936 Ford Coupe restyled by Joe Wilhelm of Wilhelm's Custom Shop in San Jose, California. The Mark I Mist started as a concept in Car Craft September 1959. Priced out to the customer for a total of $2000 in parts and labor. The body was sectioned, chopped and channeled, and the front end was modified to accept canted quad 1959 Lincoln Premiere headlights, a 1959 Edsel grille, and custom made bumpers. Other modifications included side pipes and 1957 Chevrolet Corvette tail lights. There were numerous other external and interior modifications done to the car. Once completed, the Mark I Mist was featured in Car Craft October 1960. Pictures showed it powered by a 1957 Chevrolet Corvette 283 V-8 with dual 4bbl carbs, mated to a powerglide transmission. In Car Craft Febuary 1961 the wild coupe was featured as one of the nation's 10 best customs.

Little is known of the car's history or use between 1961 and 1965 when it resurfaced in Rod & Custom June 1965. This time the car was titled the Mark Mist GT. There were several aesthetic, mechanical, and interior changes executed on the car by then. Most notably was the shortened grille, and the removal of the tail lights. The taillights had been replaced by a custom light panel. The mechanical modifications were extensive. The power plant was changed to a 1956 Buick 322 Nailhead mated to a Cadillac Dual-Range Hydramatic transmission. This engine was topped with 4 1bbl carbs on a fabricated manifold. The body had also been mounted on 1952 Jaguar XK140 frame rails. It's assumed that the Oldsmobile differential and suspension was carried over.

Joe Wilhelm purchased the Mark I Mist, and he kept it until he passed away in 1998. After Joe passed away, Bruce Glascock helped Marion Wilhelm sell some of Joe's belongings, including the Mark I Mist. Bruce took the old custom to the Cruisin' Nationals in Paso Robles where he advertised it for sale. This was the first time the car was seen in public for many years. Bruce had sold the Rod & Custom Dream Truck to Kurt McCormick some years earlier, and he knew that Kurt was into old customs. Bruce also knew a guy named Steve Woodburn who lived in Daneville, California. Steve was very much into Joe Wilhelm cars, and he owned Al Lauer's 1941 Cadillac, an old Harry Westergard kustom. As Steve was not interested in selling the Cadillac, Bruce came up with a 3-way trade. Marion needed a new car, so Kurt traded the Mark I Mist for a new car. Then he offered to trade the Mark I Mist for the Al Lauer Cadillac. The plan worked out, and Kurt traded the Mark I Mist for the Al Lauer Cadillac.[1]

In February 2010 the Mark I Mist was shown at the Sacramento Autorama. In was still in un-restored condition. The current owner lived in the San Fransisco Bay area in California.

Please get in touch with us at mail@kustomrama.com if you have additional information or photos to share about Mark I Mist.