An early version of Feigner's Chevy. 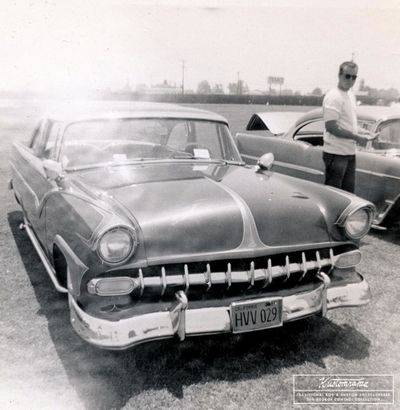 A photo of Bill Burnett's 1955 Ford Crown Victoria taken at the 1957 Long Beach Renegades Car Club Renecade. Jerry's Chevrolet can be seen next to the Ford in the photo. Photo from The George Contaoi Photo Collection. 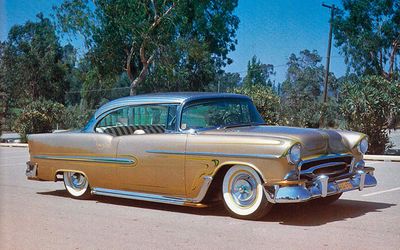 A photo of Jerry's Lil Honey Bee as it appeared after Mike Clines had given the car a scallop and pinstripe custom paint job in his dad's garage in 1958. This version of the car was named "Lil Honey Bee." Photo courtesy of James Potter. 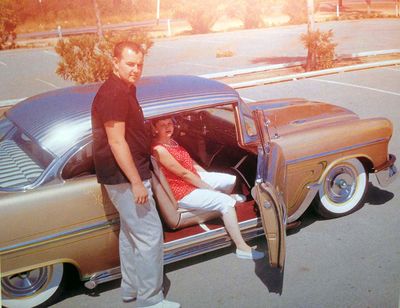 A photo of Jerry with the car. Photo by James Potter, from The HAMB. 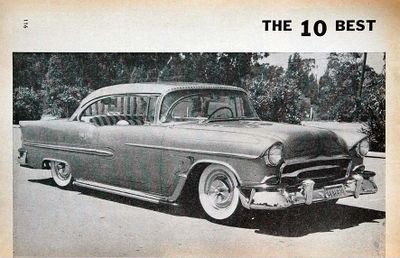 1955 Chevrolet Bel Air restyled by the father-and-son team, Cut Outs member Jerry Feigner and his father of Wilmington, California. Jerry's car was restyled by altering the side trim and change the front appearance by removing the vertical bars in the grille, installing a 1954 Pontiac grille bar and molding the grille shell. The car was nosed, decked and shaved for handles to appear a cleaner appearance. The car was lowered 5 inches all around, full-length lakes pipes and Buick hubcaps trimmed with gold bullets were added.[1]

Once the bodywork was done, Jerry's Chevrolet was painted 1958 Chevrolet Anniversary Gold. Mike Clines painted Parakeet Green scallops and pinstriped the car in his father's garage in Long Beach in 1958. He also added the name "Lil Honey Bee" to the rear quarter panel and dressed it up with chrome tape on the roof.[2]

Jerry and his father upholstered the interior in a pleated two-tone scheme of white and gold. All the window moldings were chrome plated. Later on, the car was fitted with Oldsmobile hubcaps, spotlight, and an air horn.

Please get in touch with us at mail@kustomrama.com if you have additional information or photos to share about Jerry Feigner's 1955 Chevrolet.