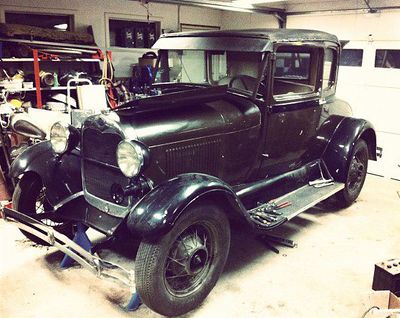 As it looked before the running boards, fenders and bumpers were removed. Photo by Kasper Kaarbø. 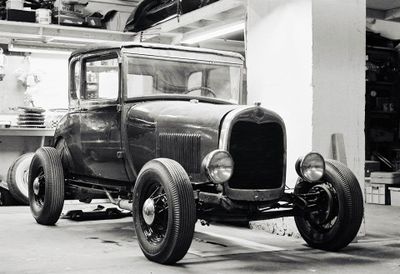 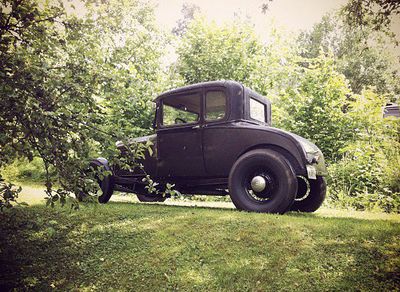 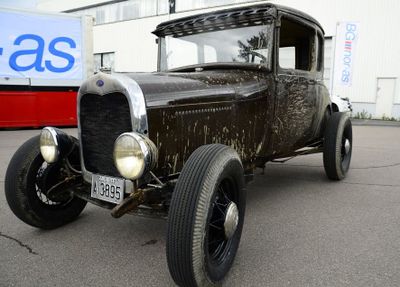 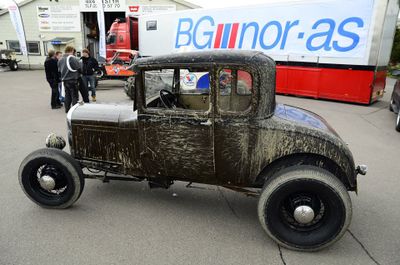 1929 Ford Model A Leatherback Coupe owned and built by Coupe Devils member Kasper Kaarbø of Oslo, Norway. Kasper was on the trail for a decent Model A Ford which he could thinker around with in the fall of 2011. Luck struck him when he found a nice project sitting in a garage in Oslo. The owner had the car sitting around for 4-5 years, and felt it was time to let it go. A deal was made, and Kasper became the proud owner of a Model A Leatherback Coupe. The car was imported from the US in the 2000's. It had been restored some time before that point, possibly during the 1980's and fitted with a new rear window opening. Eager as a boy scout, Kasper removed the fenders and running boards and installed a set of 1935 Ford 16-inch wheel shoed with Firestone blackwall tires, 6.50-16 up front and 7.50-16 in the rear. The engine and brakes were cleaned, and he got the car up and running. Two bucket seats were installed on custom fabricated mountings. The gangster cap was drilled with holes to achieve a kooler look, and the right hoodside was formed from aluminum stock. A zoomy was installed, running throughout the custom made hoodside.[1]

In June 2012, Kasper bought another Model-A frame in Sweden so he could keep the original frame stock, and modify the swedish frame. The frame will be kicked up in the rear to get the Coupe lower to the ground, however the body will be channeled yet another 5-6 inches. The top will remain unchopped, but the car will achieve a low profile with the otherwise low body. A dropped front axle will be installed as well, and the wire wheels may be swapped in favor of 16-inch steelies. The mechanical brakes will be replaced by juice brakes, and a 10 bolt rear axle from his 1949 Ford will be installed. In July, 2012, Kasper aquired a 1959 Ford truck 292 Y-block V8 with a four-speed transmission from a firetruck, which had only ran 13000 km.[1]

Please get in touch with us at mail@kustomrama.com if you have additional information or photos to share about Kasper Kaarbø's 1929 Ford.