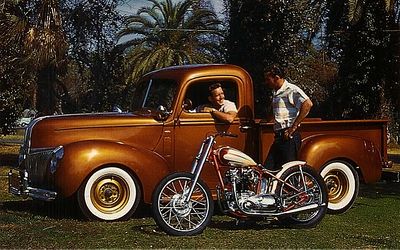 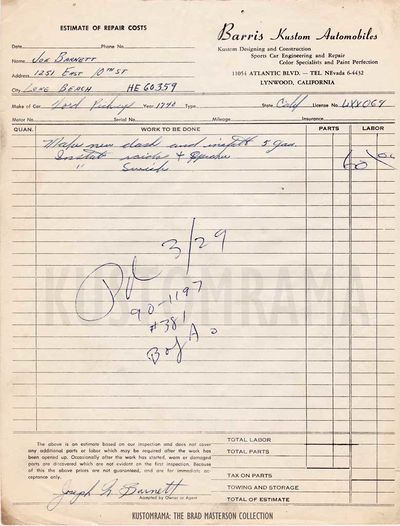 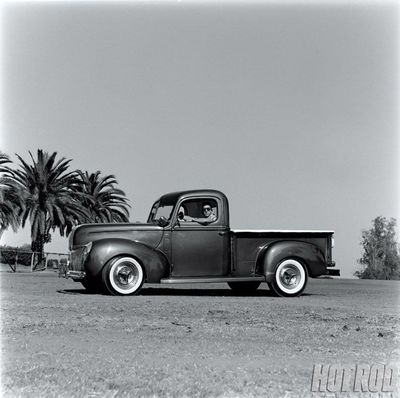 1941 Ford Pickup originally owned by Jack Calori. Jack's pickup was restyled featuring a 1956 Ford F-100 bed fit with 1952 Chevrolet pickup rear fenders. The left fender included a custom gas filler lid from a 1948 Ford. Power came from a 1956 Cadillac Eldorado engine that was hooked up to a Lincoln column-shift transmission. In 1957, Jack sold the pickup to his friend and Modesto Century Toppers member Joe Barnett of Long Beach, California. Jack offered to sell the car to Joe if he sold his 1934 Ford pickup to his buddy.[1]

Joe filled the stock cowl vent on the car, and added a pair of 1950 Studebaker front fender vents on either side of the cab. After restyling the car, Joe drove it to Modesto were fellow Modesto Century Toppers member Gene Winfield of Winfield's Custom Shop painted it in a custom-mixed candy bronze color. Before driving north to Gene's shop he stopped by Barris Kustoms, and had them modify the instrument panel in such way that the Stewart-Warner gauges sat at an angle similar to an Auburn dashboard. The instrument panel was chrome-plated in order to break up all the painted panels.[1]

Joe thought the pickup had way too much power with that Eldorado engine, and decided to install a set of Lincoln brakes. The car was featured in Hot Rod Magazine February 1959, before the magazine hit the newsstands, Joe sold the car to Richard Gates of Belmont Shores, California. Joe traded the car away for a 1955 Chevrolet Nomad and $2,500.00.[1]

Please get in touch with us at mail@kustomrama.com if you have additional information or photos to share about Jack Calori's 1941 Ford.