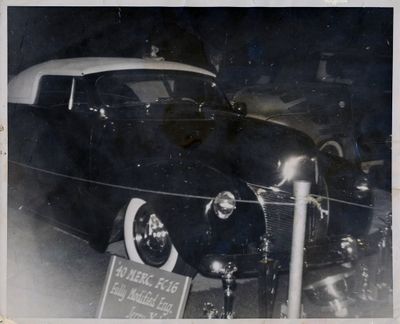 Jerry's Mercury at the 1958 Detroit Autorama. Photo from The HAMB.

As a young boy Peter Gentile got interested in custom car. His older brother went to school with Jerry, and in 2018 Peter told Sondre Kvipt of Kustomrama that around 1953 - 1954 Jerry would bring his Merc to their house where he would gaze at it; "I learned where Bill (Shorty) Hines as we called him had his shop at that time on Dix and Hanford in Lincoln Park. I would ride my bike to Bill’s shop and watch him work his magic with lead on the fins of Lil Bat. "[1]

Please get in touch with us at mail@kustomrama.com if you have additional information or photos to share about Jerry Yatch's 1940 Mercury.