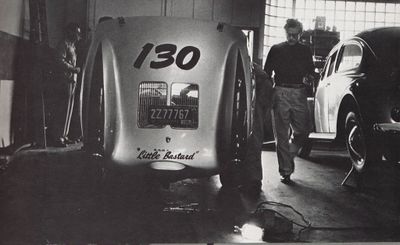 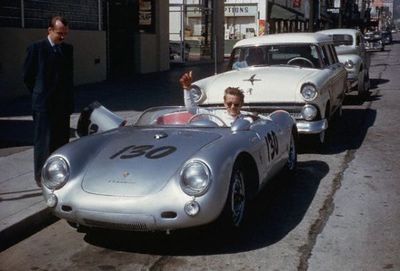 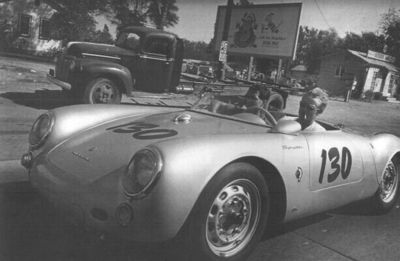 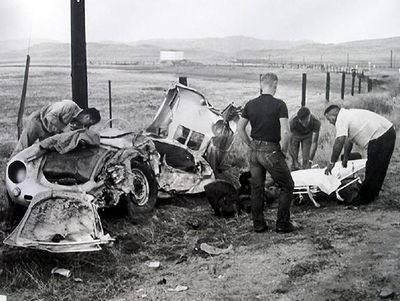 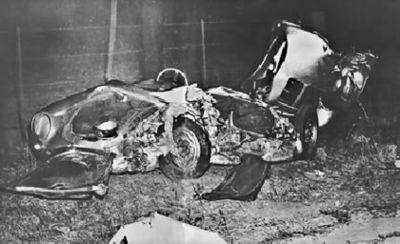 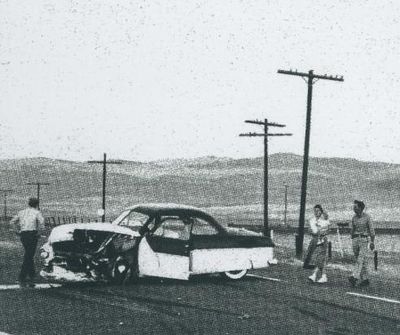 Donald Turnupseed's 1950 Ford after the crash. Donald's Ford hit James Porsche on the left side

1955 Porsche 550 Spyder owned by James Dean. The car was also known as the "Little Bastard". James bought his car in September 1955. He brought it down to Barris Kustoms where they did minor changes to it. Dean Jeffries painted the name tag "Little Bastard" on the rear and the number 130 on both doors and hood. George Barris asked Dean a couple of times why he chose 130. Dean avoided the question, but he had a reason.

The Spyder 550 was Porsche's first production model race car. The car weighed only 1510 pounds due to its hand formed aluminum body and tube frame. The car was fit with a 1.5 liter flat four engine which featured dual overhead camshaft cylinder heads, consuming 110 hp at 6.200 rpm[1]

James picked it up from Barris Kustoms September 30, 1955. He and his mechanic, Rolf Wutherihc were headed to an amateur race in Salinas. Along the way, Dean was stopped for speeding on highway 99 north of Los Angeles, on a long steep grade known as the Grapevine. The California Highway Patrol officer gave them a ticket. Dean and his passanger later stopped at a gas station known as the Blackwell Corner. Here he met an acquaintance, Lance Reventlow, Barbara Hutton's son who was also heading to the race. They talked about cars and admired Dean's car. He refueled his Porsche and bought some apples and a soda which was to become James' last meal.[2] James was speeding, heading west down highway 46 when student Donald Turnupseed made a left turn in front of him trying to enter the junction of highway 41 and 46 near Cholame, California. Donald Turnupseed's 1950 Ford hit Dean's Porsche on the left side. The crash left two injured and one casualties. James' passanger, Rolf Wuetherihc and Donald survived the crash. Rolf, who was Dean's 28 year old German mechanic was severely injured. James Dean was killed, only 24 years old.[3] Deans' crew cheif sold the engine and transmission which ended up in other race cars.[4]

Whereabouts Of The Car

There are many rumors where the James Dean Porsche is. The car was last seen by the general public on display by the California Highway Patrol in Florida. The car was shipped back by truck to California where it disappeared. When they opened the trailer in California, it was mysteriously gone. Rumors has it that it was shipped in the late 1960's to Altus, Oklahoma in a storage container where it remains with its title.[5]

Please get in touch with us at mail@kustomrama.com if you have additional information or photos to share about James Dean's 1955 Porsche.