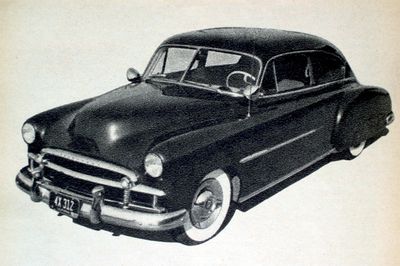 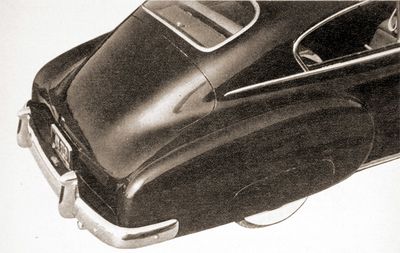 1950 Chevrolet Fleetline restyled by Barris Kustoms for Helen Manning of Ventura, California who was 18 years old at the time of the restyling. Barris Kustoms started out by filling the hood and smoothing the trunk. Sam Barris convinced Helen to do a couple of more modifications in order to set the car apart from others of the same model. Helen was convinced and Sam frenched the headlights and removed the stock rub strips that extended from the headlights back through the door panels. After the holes were filled Sam decided that the Chevy body appeared to high, so he added another rub strip of his own design in order to break up the slab-sided appearance. He removed the stock taillights and installed new ones in the rear bumper guards. The new taillights were made from red plastic. The original license lights were also removed, and replaced by a single, smaller light that was built into the rear gravel deflector. The doorhandles were removed, and the doors were push-button operated.

Once the body modifications were done, Sam painted the car in a maroon lacquer. Before Barris Kustoms handed the car over to Helen they also lowered it, installed spotlights, and added a set of whitewall tires.

Please get in touch with us at mail@kustomrama.com if you have additional information or photos to share about Helen Manning's 1950 Chevrolet.