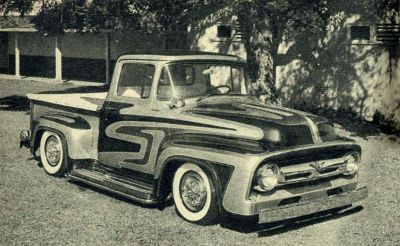 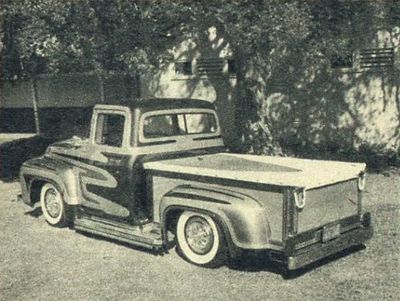 1956 Ford F-100 owned and restyled by Donn Varner of Portland, Oregon. Donn was hailed by Rod & Custom as the striping king of the Northwest, a great example of his work was his own truck. The hood was filled and the tailgate was fit with a mahogany sheet, so were the bed sides. The stock bumpers were retained, but the bolt holes were filled and the front bumper was mounted slightly lower than its stock position. The parking lights beneath the headlights were removed for a cleaner appearance. The running boards were trimmed with chrome trim strips and the exhaust pipes were mounted parallel to the running boards. The tarp cover featured a large quilted diamond in the center. It was lowered by installing a dropped axle up front and de-arching the rear springs. The handcrafted scallops made by Donn were blended in metallic purple. The pickup was powered by a Chrysler Hemi engine.[1]

Please get in touch with us at mail@kustomrama.com if you have additional information or photos to share about Donn Varner's 1956 Ford.