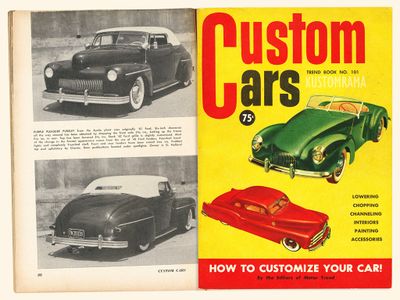 Don's Ford as it appeared when it was featured in Trend Book 101 Custom Cars in 1951. 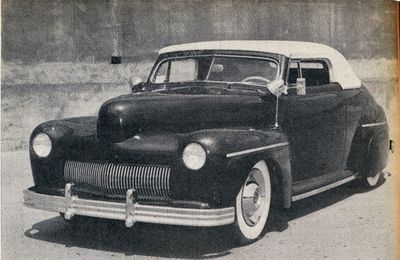 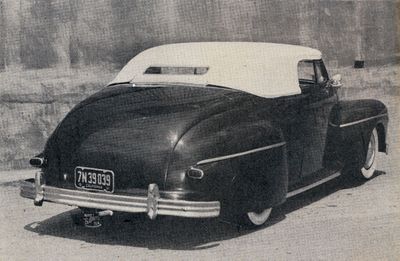 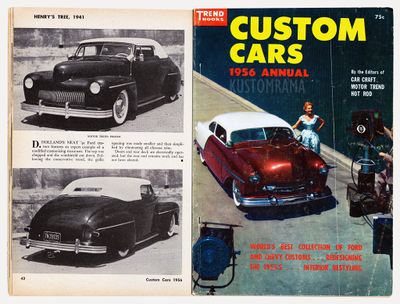 Don's Ford was almost identical to Wally Welch's 1941 Ford, another Ayala Custom restyled about the same time. According to Trend Book 101 Custom Cars, the top was chopped 5 1/2 inches. The front was modified to accept a slightly customized 1942 Ford grille and 1948 Ford fenders. The grille opening was made smaller, and simplified by eliminating the chrome trim. The headlights and the grille shell were frenched. Front and rear fenders were raised 2 inches, and the side moldings were shaved. The car was nosed and decked, and the license plate in the rear was moved down to the splash-apron. The taillights were frenched as well, and it ran 1949 Plymouth bumpers and a padded top by Lous Chavez of American Auto Tops. Chavez did also stitch a custom upholstery for the car. Custom accessory included dual spotlights, a cowl-antenna, fender skirts, and Cadillac Sombrero hubcaps. The doorhandles were shaved, and the doors and rear deck were electrically operated. Door pushbuttons were located under the spotlights. A 6 inch clearance all the way around was obtained by dropping the front axle 3 3/4 inches, and by kicking up the frame 5 inches in the rear. Once completed, the car was painted purple, one of Gil's signature colors.[2]

In 2017 Don's grandson, Donhald, told Kustomrama that his grandpa sold the car around 1951 - 1952.[1] Up until then Don's name had remained a mystery to most people, as he had only been presented as D. Holland in the magazines. In the Holland family, the car was known as the 1941 Don Holland Special.

Donhald is currently looking for his grandfather's old custom, as the family is interested in buying it back. Don has passed away, and no one in the family knows what happened to it after he sold it. If you know what happened to the car, or have any other leads on this old Ayala custom, please get in touch with Kustomrama at mail@kustomrama.com

Please get in touch with us at mail@kustomrama.com if you have additional information or photos to share about Don Holland's 1941 Ford.