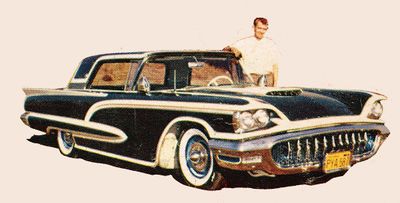 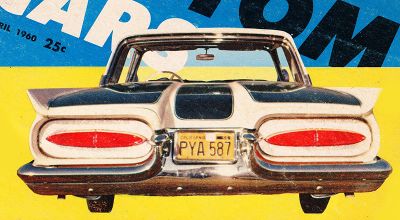 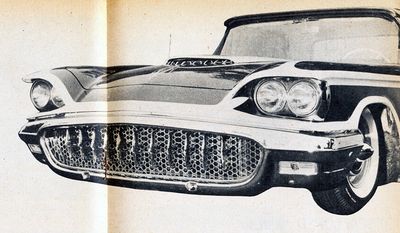 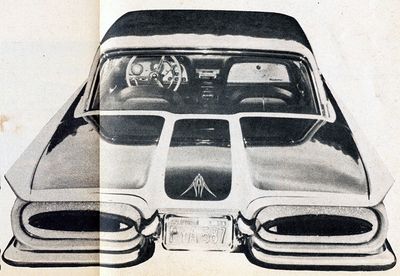 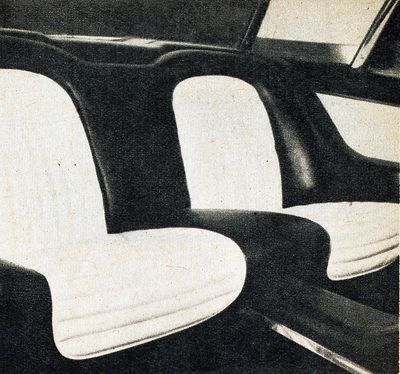 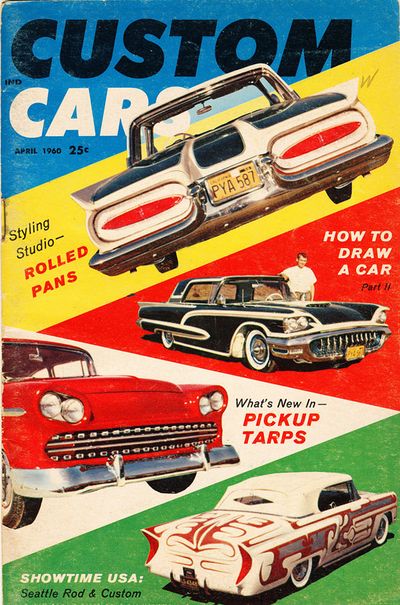 Cal's Thunderbird on the cover of Custom Cars April 1960.

1958 Ford Thunderbird owned and restyled by Dick Jackson of Lynwood, California. At the time, Dick ran and operated Advanced Custom Paints in Compton. Dick's Thunderbird was nosed, decked and shaved for door-handles. Doors and trunk were operated by solenoids. The grille was kept stock, and the hoods over the headlights were extended three inches. The light frames were chromed. In the rear, 1958 Lincoln taillight lenses were installed upon a flaked background. Inside, the center portions of the seats were removed and replaced by custom pleat and rolls inserts. A black and white Naugahyde upholstery was stitched by Pacific Custom Upholstery. The floor rugs were done in white fur as a complement to the Naugahyde interior. All window frames and garnishings were chromed. Dick painted the car pearl blue with pearl panels that highlighted the contours in the body. Dummy spotlights and 1958 Chevrolet hubcaps with bullets wrapped up the style. The car was lowered by C'ing the frame and cutting the coils.[1]

Dick sold the Thunderbird to Calvin Wiekamp of Bellflower, California. A photo printed in the book Watson's Custom Car Confessions shows Dick's Thunderbird next to the second version of Larry Watson's 1958 Ford Thunderbird. The photo is supposedly taken at the first show Cal attended with the car, and it is taken before he added Corvette teeth to the stock grille-screen and chromed 1953 Mercury teeth inside the reworked hood scoop. Cal owned the car when it was featured in Custom Cars April 1960, and according to the story, Dick Jackson was accredited the major customizing, while Cal supposedly performed the detailing himself. One of the photos in the story shows it with teeth in the hood, but prior to the teeth were installed in the grille. The rest of the photos shows the car with teeth in the grille.

Please get in touch with us at mail@kustomrama.com if you have additional information or photos to share about Dick Jackson's 1958 Ford.