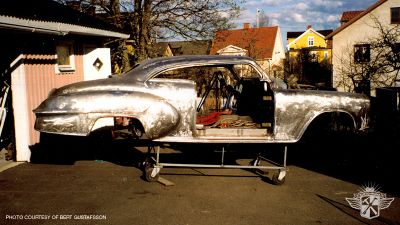 Bert's Dodge as it sat in the late 1990s. Photo by Bert Gustafsson. 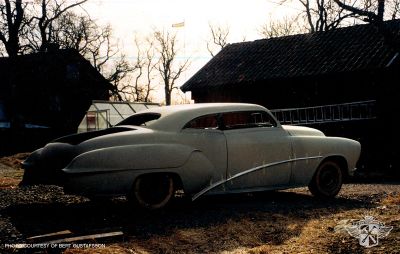 The Dodge in primer with the side trim mocked up. Photo by Bert Gustafsson. 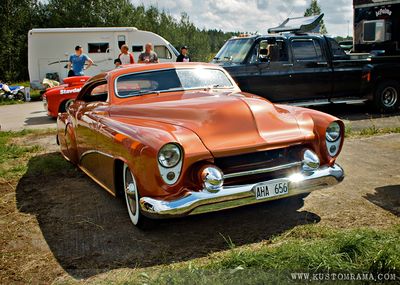 Bert's Dodge made its debut in the summer of 2008. Photo by Sondre Kvipt. 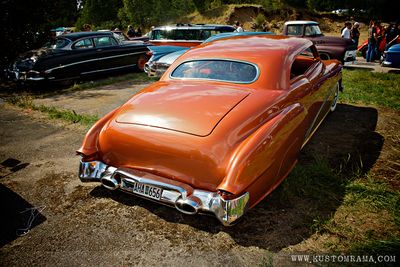 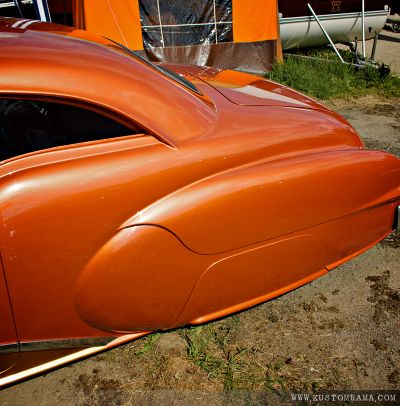 1951 Dodge Custom owned and restyled by Bert Gustafsson of Åmål, Sweden. Bert bought the Dodge after attending the 1988 Lead Sled Spectacular in Michigan. After attending the show he was in the mood for a real custom car. Due to lack of funds, he ended up buying the Dodge for 5000 SEK. Bert began customizing the car shortly after he had hauled it home. The old Dodge roof was cut off and scrapped in favor of a chopped 1955 Chevrolet roof that Bert mated with a 1951 Ford windshield frame and a modified 1951 Ford rear window. The front fenders were extended and modified to accept a pair of frenched 1954 Buick headlights. A 1954 Oldsmobile front bumper and grille bar were installed. The front bumper was altered by adding chromed Dagmars. In the rear, a 1956 Chevrolet rear bumper featuring a Kaiser license plate frame was installed. Integrated exhaust outlets in the bumper were made out of left over parts from the 1954 Oldsmobile grille. The rear quarter panels and fender skirts are Bert's own design, but he admits that some of the inspiration comes from Frank Livingston's 1949 Chevrolet. Frenched in and modified 1951 Ford glasses were used as taillights. Hubcaps are from a 1956 Lincoln. Under the shiny hood, Bert's Dodge is powered by a Chevrolet 350 engine hooked to a TH350 transmission. The front suspension is from a 1973 Chevrolet Chevelle. Most of the work on the car was done from 1988 to the mid 1990s. After being on hold for some time, the build was completed in the summer of 2008.[1]

Please get in touch with us at mail@kustomrama.com if you have additional information or photos to share about Bert Gustafsson's 1951 Dodge.