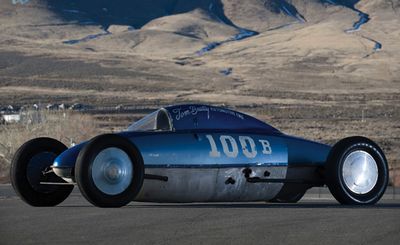 Tom Beatty was a dedicated lakes racer who later became a speed equipment manufacturer. In 1950, he was working for Barney Navarro, one of the best early speed merchants. At that time, a few successful racers who used Edelbrock equipment ran their flathead V-8 engines on potent, horsepower-inducing nitromethane. Navarro countered with forced induction. He and Beatty built a flathead with a GMC 3-71 supercharger fed by four Stromberg 48 carburetors. With this blown V8, Beatty’s T roadster was competitive, but its aerodynamics left something to be desired.

Other innovations included independent rear suspension, with swing axles fashioned from early Ford components, to ensure the power was constantly planted on the dry lake’s uneven surface. While earlier tanks used an abbreviated in-out gearbox, Beatty fitted a modified Ford gearbox, and used second and high gears to better accelerate up to speed on the short lakes course. He inverted a Model A Ford front axle, then mounted a transverse leaf spring directly behind it, for a lower silhouette and improved aerodynamics.

The December, 1951, issue of Hop Up, commented on Beatty’s effort: “Finally an original tank has come along – built by Tom Beatty.” The article continued, “Since the day Bill Burke brought the first surplus drop tank-bodied car to the lakes, all other cars of this type have been carbon copies of his first efforts. Burke’s car was ahead of everything else at the lakes in those days, but now, (Hop Up declared) it is about to be outmoded.”

Beatty and Navarro brought the freshly-completed lakester to the 1951 Bonneville Nationals. For its debut, the tank was painted black with “Auto Accessories Company” painted on the side. Running a 296 cubic inch Mercury flathead V-8 and the blower setup, on alcohol fuel, in the “D Lakester” Class, Beatty made a torrid 188.284-mph run in his brand-new tank, instantly establishing it as the fastest open-wheeled car at that event, and the fastest lakester built to that date.

After his winning year in 1951, with Belond as the sponsor, now painted red and white, the tank was called the Belond Equa-Flow Special. Beatty commissioned famed racecar builder Frank Kurtis to fabricate a streamlined, aluminum fairing. The ensuing publicity greatly benefited Navarro Equipment and Belond exhaust systems. And this was just the beginning...

Tom Beatty understood that supercharging was key to his success. He continued to develop the 3-71 setup, adding V-belts until he was using eight at a time. Plagued by connecting rod failures, he ‘boxed’ the rods by welding on side plates, re-machining and balancing them. Beatty ran boost pressures as high as 15:1. And although he blew more than his share of highly-stressed flatheads, when his engines held together, he managed the fastest times. The Beatty flathead-powered tank set SCTA’s ‘Top Speed of the Season’ at the dry lakes for five straight years, from 1951 to 1955. Tom did it again in 1959, with a blown Oldsmobile engine. No one else even came close.

Running at Bonneville in 1952, Beatty succeeded in running a 203.61-mph one-way, again becoming the fastest-open-wheeled car. Featured in the November 1952, issue of Hot Rod, the Beatty tank was named “Hot Rod of the Month” and it was illustrated with a classic Rex Burnett cutaway drawing.

Plagued by four successive engine failures IN 1954, the irrepressible Beatty returned in 1955, sponsored by Weiand Power Equipment, with the tank repainted yellow, and clocked a two-way average of 211.267-mph to become the 16th member of the much-respected 200-mph Club. In 1956 and 1957 at Bonneville, Beatty turned 211.888 mph and 209.180 MPH respectively, setting “C Lakester” records that still stand.

Reportedly, the Beatty belly tank handled so well that Tom was invited to give a few high-speed demonstration runs at Carrell Speedway, where he dazzled the crowd, throwing up clay in the turns. At Bonneville, he was known for dramatic 200-mph U-turns on the salt at the conclusion of many runs.

Encouraged by his success, in 1958, Beatty opened up his own shop, Tom Beatty Automotive Engineering in Sun Valley, California. The flatheads were approaching obsolescence. Overhead valve V-8’s were being used to set more and more records, so Beatty switched to Oldsmobile V-8 power, and adapted the Ford transmission. He cast his own blower manifold, manufactured a blower drive, and “pruned” a 6-71 GMC supercharger so it would better fit in the cramped engine bay, while accommodating six Stromberg 48 carburetors. The new setup proved itself first time out. Running a 303 cubic inch Olds V8, de-stroked to 260 cubic inch for higher revs, with a GMC 6-71 blower and six Strombergs, Beatty set a new Bonneville “D lakester” record of 232.98 mph.

Along with the engine change came a new look. The tank was repainted in two shades of blue with Tom Beatty Automotive eEgineering emblazoned on the sides of the canopy. Weiand and Grant Piston rings were co-sponsors. Beatty began making and selling his own 6-71 blower manifolds and multi-belt blower drive set-ups (he didn’t trust Gilmore belts). The newly-established Tom Beatty Automotive Company also built Olds engines for drag racers.

Beatty was a relentless competitor. In 1959, at the salt flats, he pushed the tank, now with the Olds V8, to another D Lakester record of 239.38 mph. Running on a shorter lakes course, that year, he set the SCTA dry lakes record of 212.26 mph

Old Bonneville salts still recall Tom Beatty’s 150-mph ’1940 Ford push truck. He often used his previous year’s race engine in his sedan delivery, to ensure he’d get fast starts. Ever the innovator, to accommodate the larger-sized Oldsmobile engine, the modified 1956 Oldsmobile 4-speed Hydra-Matic transmission, and the Halibrand quick-change rear, Tom lengthened the tank’s tubular chassis some 14-inches. Now, in lieu of a push truck, the Hydra-Matic allowed him to start on his own. Still competing hard in 1962, Beatty bettered his earlier mark with a record-setting average: 243.438 mph – making his tank the fastest open-wheeled car again.

In 1963 the Beatty tank was described as “the oldest on the salt.” Tom made a 252-mph one-way run, but was unable to back it up for a record. In 1966, he discovered the sport of dune buggies. Delighted to have a pastime he could enjoy with his family, Beatty retired his now-legendary tank, and it rested in a corner of his shop until it was sold, to Tom Gerardi, who separated the engine from the tank and disassembled it. Beatty died later that year.

The tank passed to Mark Dees, a noted racer and historian. After Dees died in 1997, the tank was purchased from his estate by Dave Simard, an acclaimed New England-based hot rod builder and historic hot rod restorer.

Simard painstakingly gathered up the original parts, found the correct freshly-built, blown Olds V8 built by Tom Beatty, and a cache of authentic spares, then reassembled the Beatty tank as it last ran. He brought it to Bonneville in August 1998, for the 50th Anniversary of the event.

Belly tank lakesters like this one are seldom available for sale. The Beatty tank is the most innovative, the fastest and most successful belly tank lakester ever built, both at the dry lakes and at Bonneville.

A remarkable survivor, it remains a tribute to the skill and courage of Tom Beatty, who ignored convention and devised a better way of building a classic open-wheeled racer. A supercharging pioneer, he helped prove forced induction could achieve unprecedented power outputs. Tom Beatty could do it all: he designed, built and drove this belly tank, achieving countless records.

Please get in touch with us at mail@kustomrama.com if you have additional information or photos to share about Tom Beatty's Belly Tank Lakester.