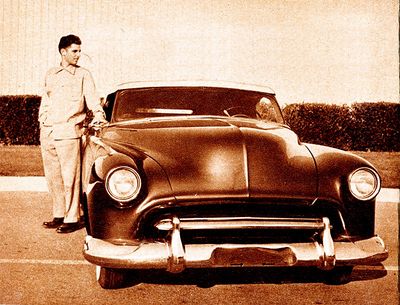 Leon's Chevrolet as it looked when it was featured in Rod & Custom April 1954. Photo by Ralph Poole. 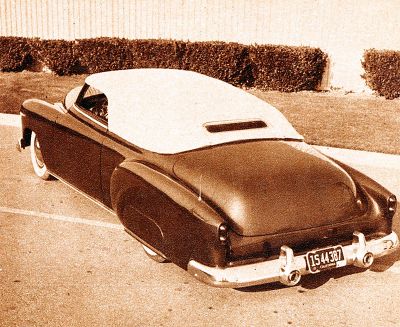 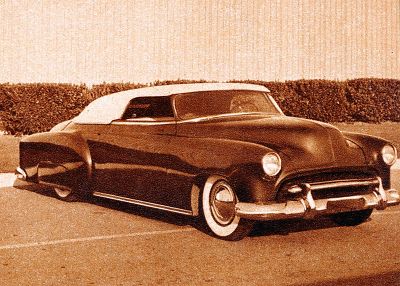 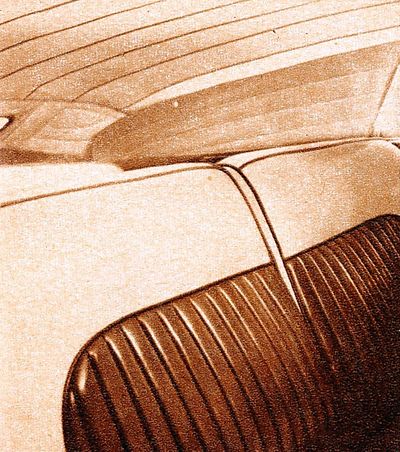 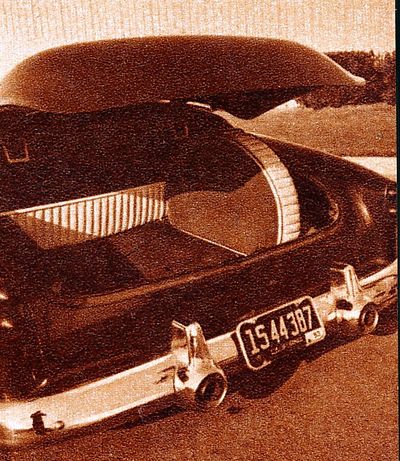 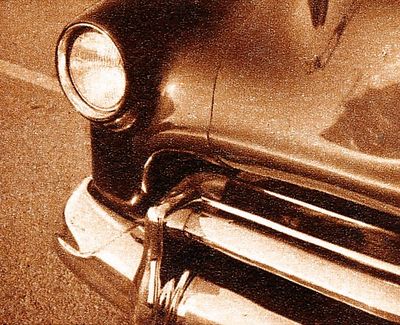 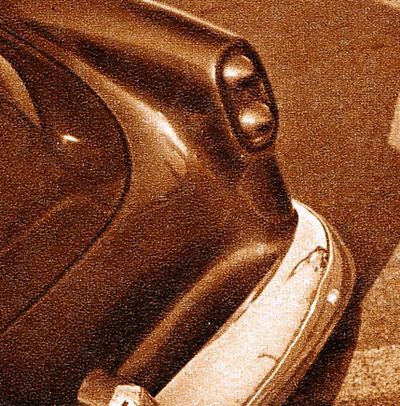 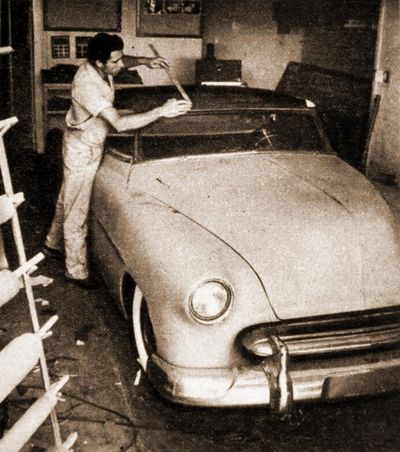 Before the 1954 National Roadster Show, Leon had Bill Gaylord build and overhung top for the car. 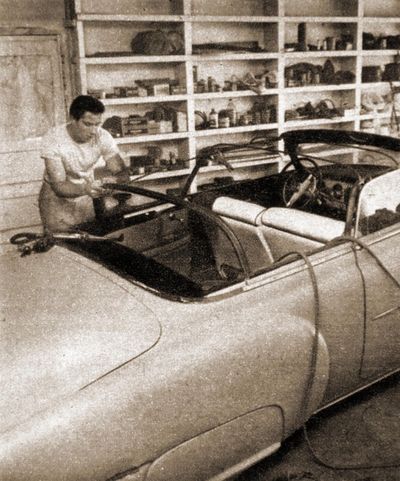 Notice the dent behind the fender skirt. 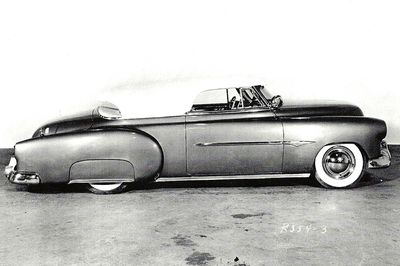 Leon's Chevrolet as it looked when it was shown at the 1954 National Roadster Show in Oakland. Notice the side trim. Photo from the Ron Brooks collection. 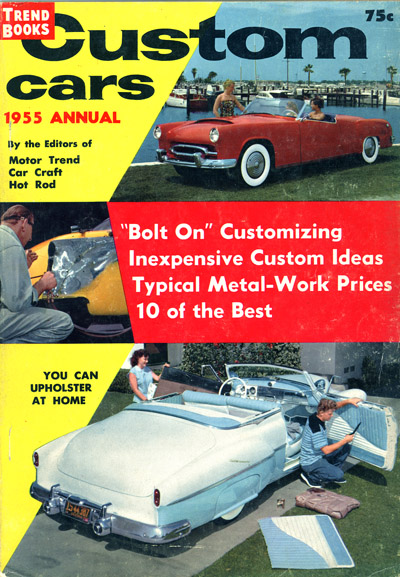 The turquoise and white version of the Chevrolet, still featuring the Buick taillights, was featured on the cover of Trend Book 116 Custom Cars 1955 Annual. 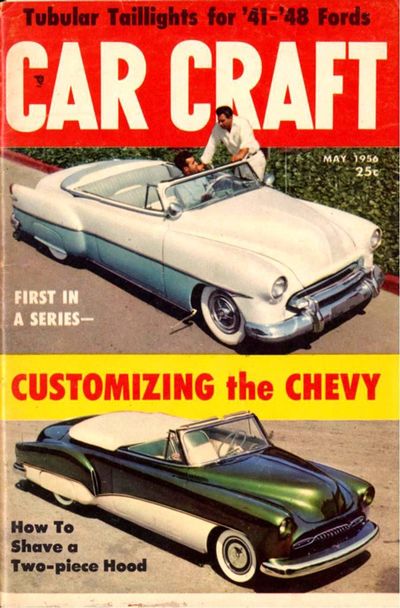 After Tommy D'Amico bought the car from Leon, it was featured on the cover of Car Craft May 1956. This version featured reshaped quarter panels with 1954 Packard taillights, another rear bumper and Fiesta Hubcaps. The photos were taken by Eric Rickman April 13, 1955. Photo by Eric Rickman, courtesy of Car Craft Magazine. 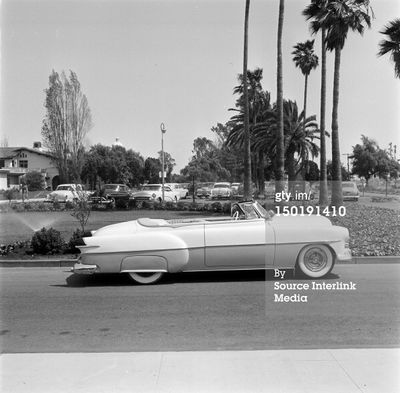 Photo by Eric Rickman, courtesy of The Enthusiast Network. 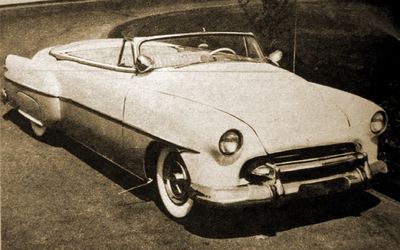 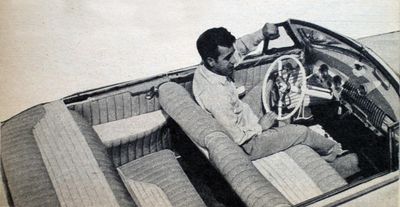 1952 Chevrolet Convertible restyled by Al Andradeas for an unknown owner. The owner gave Al instructions to make the car resemble an Oldsmobile when it was completed, but with a prodigious amount of customizing. The grille shell on the car was rounded by molding tubings into the lower edge of the hood and along the inner fender panels. The door handles were removed and rest of the exterior trim were discarded, and the gas filler door was molded shut. A 1951 Oldsmobile floating bar was inserted in the rounded grille shell. The front bumper originated from a 1951 Oldsmobile as well. The headlights were frenched by using 1952 Mercury headlight rims, this tunneled them, and added slightly length to the car. The hood was extended down to the grille opening, shaved and peaked. The windshield was chopped 5" according to Rod & Custom April 1954, however Car Craft May 1956 stated 3 1/2". The Chevy featured a padded top fabricated by Gaylord's Kustom Shop. The two-piece windshield was replaced by a 1952 Oldsmobile unit. The rear fender skirts were extended and flared to accentuate lowness. The car was C'd and lowered 4 inches. The exhaust tips were routed through the Buick bumper guards. 1950 Buick taillights were frenched to the rear fenders. A single antenna was placed on the left rear fender. It was lowered six inches both aft and rear. The frame was C'd 6", and the upper and lower A arms were reworked. The coils were cut and lowering blocks were installed.[1]

Indian tribe member Leon Welmas, of Palm Springs, California,[2] purchased the unfinished customized convertible when he was 19 years old.[3] After Leon had bought the car, he finished it off.[3] He had Gaylord's Kustom Shop fabricate an upholstery and a white padded top. The seats were done in gold and white Naugahyde, along with door, quarter and kick panels to match. The interior of the top was done to match, fit with pleats that ran the length of the car, instead of side to side. The trunk was also upholstered. When the it was ready for paint, many coats of metallic purple were applied.[1]

Around 1954/1955, Leon decided to update the car a bit, and he had Gaylord make a new overhung top. He might have made a new upholstery in bronze and white, because according to the 1954 Oakland Roadster Show program,it was painted bronze with a white and bronze interior.[4] Dual spotlights and Packard side trims were added. New Maroon paint was applied by Duncan Emmons.

In 1955 the car was featured on the cover of Trend Book 116 Custom Cars 1955 Annual, by then it painted painted turquoise and white, seperated by an extended Packard side trims. Gaylord's Kustom Shop was responsible for the rolled & pleated two-tone interior. The color was done in the same color as the car, white and turquoise. The interior and exterior were separated by 1949 Pontiac side trim.[5]

Tommy D'Amico, of Lynwood, California, bought the car around from Leon around 1954/1955. After completing a two years service in the army overseas, the first thing Tommy had in mind was to buy a neat car. Tommy searched around for a suitable driver in his own hometown Lynwood. He ended up buying Leon's old 1952 Chevrolet Convertible from Gaylord's Kustom Shop. Tommy had the rear fenders reshaped to accept the 1954 Packard taillights. The rear bumper was replaced and the exhaust tips were routed through the bumper corners. Tommy added Fiesta Hubcaps. This version of the car was featured on the cover of Car Craft May 1956.[6] The photos used in the story were taken by Eric Ricman April 13, 1955.[7]

The whereabouts of the car is currently unknown.

Please get in touch with us at mail@kustomrama.com if you have additional information or photos to share about Leon Welmas' 1952 Chevrolet.