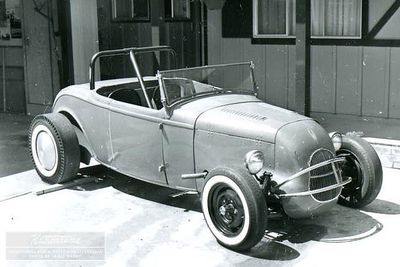 James Handy's 1932 Ford Track Roadster. The car was found in a field near San Jose. It ran 134 at Bonneville in 1950 with a flathead, then local Bay Area drag strips in the 1950's with a Buick nailhead. Photo courtesy of James Handy. 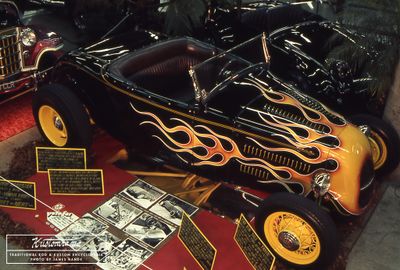 Jim turned the track roadster into a street rod. Chevrolet 151 4-cylinder, Merc Marine head, 4-speed, Brizio chassis, McElley black lacquer, and Art Himsl flames. It is now in the collection of McPherson College in Salina, Kansas. This photo was taken at the 1976 Grand National Roadster Show in Oakland. Photo courtesy of James Handy. 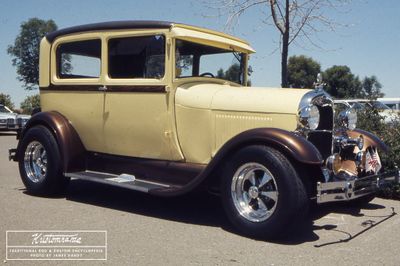 Jim's Model A Tudor Sedan also had a Chevy 151. It got 37 mpg on the highway in the late 1970's and it was the subject of numerous Rod & Custom stories as "The Gas Crunch Sedan". Photo courtesy of James Handy. 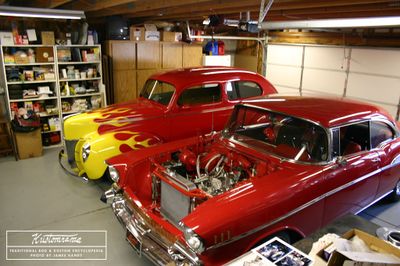 Jim found the red 1940 Ford Tudor Sedan on eBay with a garbage motor. He added 350 small-block engine and Vintage Air before he sold it to another NorCal rodder. The red '57 Bel-Air was one of four Bel-Air hardtops found in an abandoned storage facility in SoCal. "My son and I restored it over a 10 year period." It ran a 350 crate, 700R4, and power brakes. Jim's son had custody of the car in 2019. Photo courtesy of James Handy. 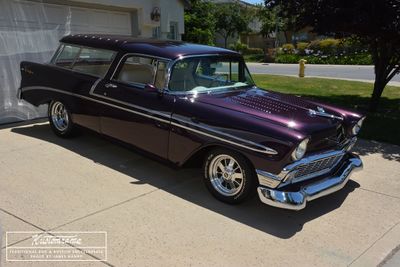 In 2019 Jim's latest ride was another eBay find, a 1956 Chevrolet Nomad. Photo courtesy of James Handy.

James "Jim" Handy is a well-known automotive photographer. In 2019 Jim told Sondre Kvipt of Kustomrama that photography started for him in high school when he was part of the yearbook staff. In 1960, while still in High School, he attended the 1960 Phoenix Autorama. After that, he was hooked, and he started photographing shows in the area the same year.[1]

After High School, Jim moved out West to attend the San Jose State University. He got to know the guys in the area and started hanging out at the drive-ins and the cruising spots. Living in San Jose, Jim also started photographing car shows in Oakland, San Mateo, San Jose, San Francisco, Napa, Monterey, and Sacramento. He began shooting the Oakland Roadster Show in 1962, and six decades later he had documented almost all of the now Grand National Roadster Shows ever since.[1]

In 1967 James and Tom Meyer were asked by the late Jim McLennan to be Track Photographers at Fremont Drag Strip. Every Sunday for the next three years, Jim and Tom photographed and reported the day's results to National Dragster and Drag News via overnight express mail. The two good friends also traveled up and down the West Coast, photographing action at various drag strips in California.[1]

Between 1964 and 1972 Jim shot 25,000 negatives and slides at California drag strips. "I started freelancing for Tex Smith at Rod Action which led to assignments for Rod & Custom, Custom Rodder, Truckin' and Street Rodder," Jim told Sondre.[1]

Jim's fulltime job as an aerospace service engineer on US Navy ships kept him busy during the week. "I moved from Navy ships to Polaris rockets in 1981, freelancing along the way to fund my street rod projects." From 1970 to 1980 he did the slide show for the Grand National Roadster Show Awards Ceremony, and in 2005 he was inducted into the Grand National Roadster Show Hall of Fame along with Chip Foose.[1]

Along the way, Jim managed to raise a family, and in 1989 he and his wife opened a frozen yogurt and ice cream shop near Sacramento. He sold the ice cream store and retired from the daily grind in 2006. Today Jim is retired, currently living in Northern California with his wife, Sandy. He is still photographing hot rods and dragsters, and he spends his time working on his website www.jameshandyphotography.com/ and cataloging some 25,000 drag racing and car show negatives and slides. Jim has also been kind enough to share some of his photo treasures with Kustomrama and our worldwide tribe of enthusiasts, that we will upload and share to The James Handy Photo Collection.[1]

Please get in touch with us at mail@kustomrama.com if you have additional information or photos to share about James Handy.