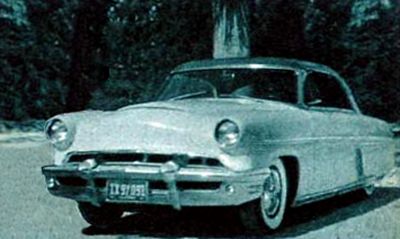 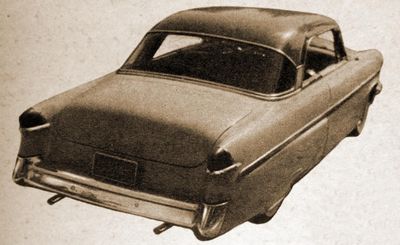 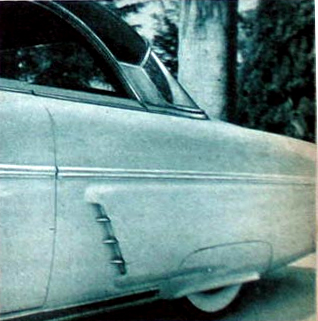 1953 Mercury Montery restyled in 1954 by Dick Richardson's Custom Shop for Bob Aguilera of San Bernardino, California. After buying a new 1953 Mercury, Bob drove over to Dick Richardson's Custom Shop also located in San Bernardino for a face lift. The body was lowered six inches, then the grille bars had to go. The car was then nosed, decked and shaved for door handles, both doors and deck-lid were push button operated. When modifications reached this stage, Bob thought it was about to quit. However, he and Dick Richardson had hatched a few refreshing ideas for the car. The phony airscoop on the hood and rear fenders were made functional. Then came the problem of selecting the right taillights. Just about every type of taillights available has been installed on Mercurys, with varying degrees of success. Bob wanted something seldom seen on Mercurys, something with a form of its own that would completely transform the appearance of the car when viewed from the side or the rear, but at the same time something that would be compatible with basic form of the stock Mercury body. The final choice was a pair of 1954 Packard Clipper taillights. Once it was finished, it was featured as the "Reader's Car of the Month" in the December 1954 issue of Rod & Custom.[1]

Please get in touch with us at mail@kustomrama.com if you have additional information or photos to share about Bob Aguilera 1953 Mercury.