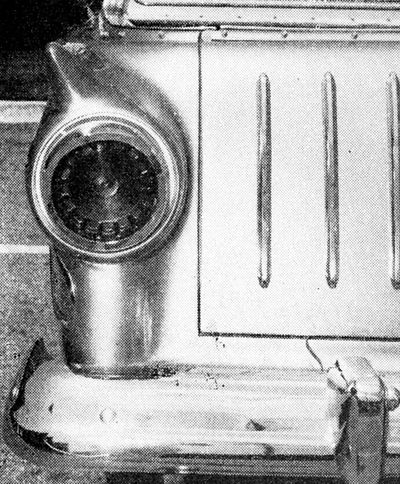 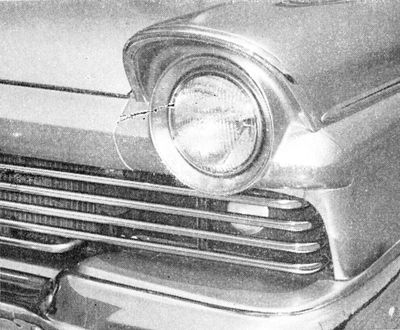 1957 Ford Ranchero used as Barris Kustoms' shop truck. The headlights were frenched and fit with 1956 Ford Pickup headlight rims. A handformed tubular grille was inserted. Sidetrims from a 1958 Ford Ranchero was installed and the tailgate featured 1958 Chevrolet Nomad chrome trim. The taillights were modified by inserting 1960 Dodge Dart lenses. The car was lowered by cutting the coils and installing lowering blocks in the rear. Once the bodywork was done, it was painted Pearl Blue. The blue and white pearl Naugahyde interior was fabricated by Eddie Martinez of Lynwood, California. Buick hubcaps with extra bullets and dual spotlights wrapped up the style of the parts hauler.[1]

In 2019 Leandro Laigo told Sondre Kvipt of Kustomrama that he bought the Ranchero from George Barris' nephew in Tustin, California in 1968. He can't remember his name, but he and his mom lived in the same condo complex as Leandro and his wife. "He parked next to me and wanted to buy a black Ford Galaxy 500. He was a blonde surfer kid. The Ranchero was yellow, had a black Naugahyde tonneau cover with a white playboy bunny in the middle." Leandro drove it from California to Seattle upon ending his enlistment in the USMC. "Driving on I5 freeway with 4:11 gearing all the way to Seattle blew the engine," Leandro told Sondre. "I traded it in at a dealership for a 68 VW BUG. I wish I would have kept it."[2]

Please get in touch with us at mail@kustomrama.com if you have additional information or photos to share about Barris Kustom's 1957 Ford.